There’s a good chance that someone you know and love has Alzheimer’s disease. It affects around 5 million Americans every year.

Every one of those statistics represents a grandparent, a mother or father.

Alzheimer’s Awareness Month was created to help raise awareness of this disease and  fight stigmas associated with dementia. The awareness month began in 2012.

So in honor of this month, let’s take a closer look at this disease, what causes Alzheimer’s and its connection with diabetes.

This disease was discovered by Alois Alzheimer, a German psychiatrist, after studying a 51-year-old patient showing signs of seriously impaired memory. After the patient’s death, Alzheimer carefully studied her brain under a microscope, revealing several abnormalities including plaque buildup. This remains one of the hallmarks of the disease.

This plaque build-up disrupts communication between brain neurons. As a result, it lowers the ability to think and function clearly.

What Is the Difference Between Dementia and Alzheimer’s?

Dementia is a term that describes a group of symptoms that indicate a mental decline that affects day-to-day life.

Other types of dementias include:

How Can You Prevent Dementia?

One of the most important ways you can prevent dementia-related diseases is to maintain a healthy and balanced diet.

In order to understand the importance of healthy eating, let’s take a quick look at how insulin is used by the body.

Insulin is produced in the pancreas and is used to control the amount of sugar in your blood. This sugar (glucose) is one of the main sources of fuel for your body.

However, issues with your blood sugar can indicate diabetes. There are two types of diabetes:

Type 1 diabetes is usually hereditary, and happens when your immune system attacks the pancreas. As a result, it can’t produce enough insulin.

Type 2 diabetes is more likely to appear as people age. While those with Type 2 diabetes can produce insulin, their bodies can’t use it effectively. This is insulin resistance.

Diabetes can place you at risk for dementia as well as several other health conditions, including:

Did you realize that something as simple as learning a new language or completing a crossword puzzle can help play a role in preventing dementia? Cognitive stimulation is an important factor in helping your brain remain healthy and active as you age.

Other factors that may help you prevent dementia include:

We know how important it is to provide a safe, stimulating environment for those who have dementia. When you realize that your loved one is safe, it enables you to step out of the role of caregiver and back into your role of son, daughter or spouse.

Our staff has received extensive training on how to best serve those with dementia. Their compassionate, friendly dedication to our residents demonstrates why so many enjoy calling Cedar Cove home.

We invite you to take a tour of our assisted living and memory care residences to see how we can help those who are dear to you. 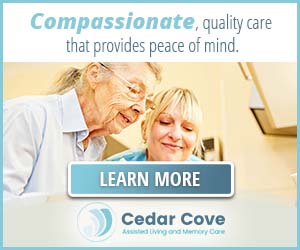